Recently, I subscribed to the official Lean In Shanghai account on WeChat, China’s ubiquitous messaging platform. As an offshoot of other so-called Lean In Circles around the world, the account publishes a wide variety of articles about women. Most pieces are in keeping with the tone of the bestselling book — published by Facebook chief operating officer Sheryl Sandberg in 2013 — from which the group takes its name.

On the surface, Lean In Shanghai’s articles appear to promote the kind of empowering challenge to gender imbalances that Sandberg addresses in her book. Most pieces tell the stories of ambitious young women finding high-powered jobs, starting their own companies, traveling the world, studying abroad, and cultivating refined lifestyles. The organization pairs these articles with frequent events at some of Shanghai’s more prestigious locations, to which successful women are invited to speak on themes like entrepreneurship, career development, and finding a work-life balance. Tickets for such events sometimes go for around 400 yuan (about $58).

Recently, Lean In Shanghai reported on the life of Sun Jie, the chief executive of Ctrip, one of China’s largest travel companies. Readers learned how Sun rises between 5 a.m. and 6 a.m. every day so that she can make time in the evenings for her two children. A casual scroll through the platform’s other headlines saw such gems as “While You’re Watching Movies, She’s Meeting the CEO of Vogue,” a less-than-subtle barb aimed at female film buffs everywhere. Other headlines conspicuously make use of words like “elite,” “best talents,” or “most influential.” Rather than peddling an aspirational message of female empowerment, Lean In Shanghai styles itself as a high-end ladies’ club to which only the city’s most prodigious women need apply.

There are several reasons why I take such a dim view of Lean In Shanghai. First, the Chinese women profiled on the platform have been scrubbed clean of anything that may add complexity, nuance, or even weakness to their images. They are, practically without exception, either consummate professionals, inspiring mothers, or a combination of both, with the implication that women who fail to attain their stratospheric standards have only themselves to blame.

Such messages are clearly elitist and encourage the kind of careerism and workaholism that feed off of guilt and self-doubt. Am I too lazy to achieve my ambitions? Why do I feel so exhausted at work, while she manages to juggle a high-flying corporate job and family commitments? No wonder Rosa Brooks — herself a law professor, Foreign Policy columnist, and senior fellow at the New America Foundation — wrote in a Washington Post blog that Sandberg’s book made her feel like a “self-sabotaging slacker.” In trying to follow the book’s advice to work harder, be more sociable, and find more time for her family, she just made herself miserable and exhausted.

Second, the majority of Lean In Shanghai’s articles fail to mention one all-important resource: money. Most Chinese women do not have the disposable income to study at Yale, take luxury vacations to Bali, or learn how to paraglide. “Lean In” only offers us a seductive glimpse of virtually unattainable lives, lives that belong to godlike paragons of female achievement who move in circles so far removed from ours that their status as role models is questionable at best.

Third, Lean In Circles explicitly aim to recruit exceptional women at the peak of their professions, rather than “average” women from all walks of life. This technique — what writer Linda Burnham has called “1 percent feminism” — actually thwarts any feminist objective that Lean In Shanghai might hope to achieve.

In fact, the brand of women’s liberation furthered by Lean In Shanghai is still fixated on hypersexualized, objectifying images of women that hardly establish them as equal in status to their male counterparts. A cocktail party that the organization held a few nights ago is a case in point. The event, called “Smart Is the New Sexy,” was advertised with a poster campaign so backward it looked more like a scene from “Fifty Shades of Grey” than from a women’s organization. The monochromatic image on the poster features a naked woman turned toward the viewer, kneeling, her head bent forward to obscure her face, her breasts and genitals hidden from view by her thick cascade of hair. Preposterously, written beside her in Chinese and English is the slogan “Brains = New Tits.”

The poster for the cocktail party hosted by Lean In Shanghai. From Weibo

The ludicrous juxtaposition of the submissive, vulnerable female figure with ostensibly progressive language tells you all you need to know about how much Lean In Shanghai truly embraces feminist progress. At first glance, the claim by founder Kang Kang that Lean In Shanghai is “not a political group and [does] not wish to bring political change” might justify the organization’s regressive attitude.

Yet the fact remains that Lean In Shanghai’s raison d’être is to promote female self-actualization — an explicitly feminist cause that requires fundamental social and political change in China. Kang cannot have it both ways; appropriating emancipatory language while furthering the objectification of women is trite and reductive.

So is the group’s “everywoman” rhetoric. In a previous interview with Sixth Tone, co-founder of Lean In Beijing, Virginia Tan, stated that the organization “will have the ability to hire experts to deal with the unique situations facing [rural] women, and help [them] realize their dreams.” But the fact remains that outside the uppermost echelons of society, Lean In chapters are simply not bothered about the concerns of women at all. The organization addresses a cohort of wealthy urbanites whose interests diverge so much from the rest of us that claiming to represent us is, frankly, insulting. What use does a country farmer have for a cocktail party? What does a factory worker gain from a Lean In fundraiser?

Of course, bringing women into leadership roles is key to realizing gender equality, and encouraging women to reach the top ranks of both the private and public sectors is a meaningful endeavor. However, Lean In Shanghai demonstrates a very narrow definition of success, drawing a clear link between the presumed value of self-reflection and the eventual access to material wealth and social prestige. Instead, it should be focusing on the real barriers to social mobility that career women in China face.

For instance, the introduction of the two-child policy is predicted to further hurt women’s chances in the recruitment process, as employers will suspect that they may take more maternity leave. This is a challenge that matters to women across the country and demands that we change both official policy and social attitudes toward work and family life. It is exactly the sort of fight that Lean In Shanghai could take on, and yet the organization insists on encouraging women to realize their ambitions within the current system.

Last week, while celebrating International Women’s Day, I walked down a shopping street decked out in advertisements telling us “goddesses” to spend our traditional half-day holiday indulging in retail therapy. In a social environment where even institutionalized forms of female empowerment are compromised by brands, I was reminded of how important it is for Chinese women to take up the feminist cause. How depressing, then, that one of my city’s most renowned women’s clubs does not seem to feel the same way. 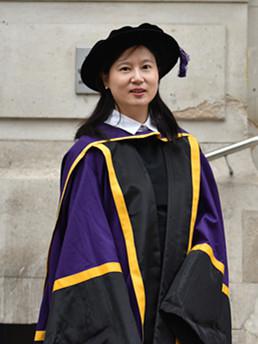