On Oct. 27, the launching ceremony of the 2019 Global Cities Forum and World Cities Day Shanghai Observance was held at Shanghai Jiao Tong University. The theme of the forum was Changing the World: Innovations and Better Life for Future Generations. 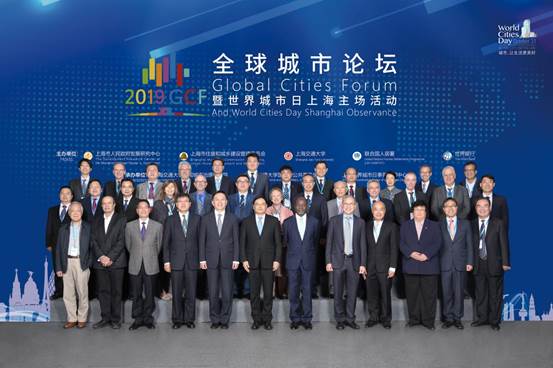 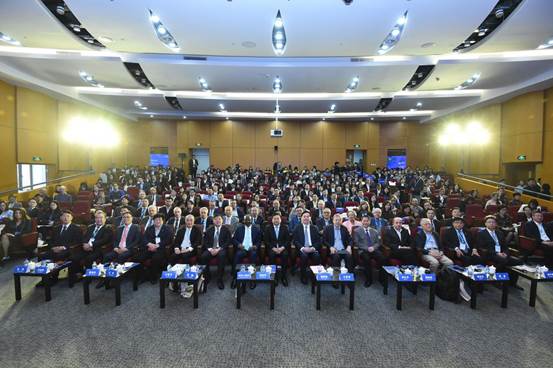 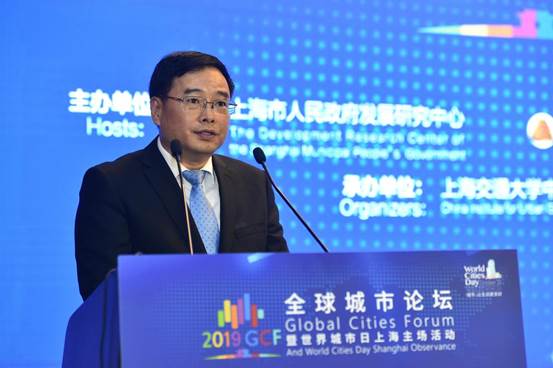 Tang Zhiping, deputy mayor of Shanghai, delivers a speech on innovation at the 2019 Global Cities Forum.

Tang Zhiping, deputy mayor of Shanghai, attended the opening ceremony and delivered a speech on innovation. He congratulated the forum and emphasized the importance of urban development in the context of globalization and innovation. Tang later spoke on the internal driving forces behind China's urban transformation and highlighted Shanghai’s achievements in construction, innovation, and sustainable development. He challenged attendees to make meaningful connections as Shanghai continues to be built, or transformed, into a remarkable global city. 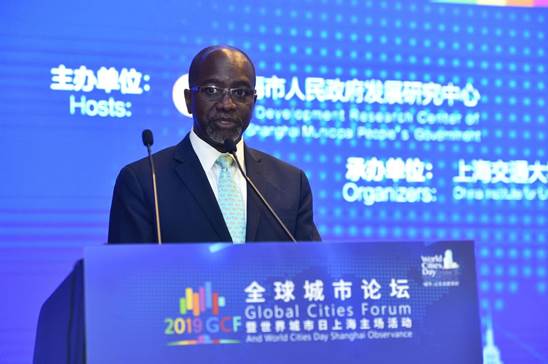 After cordially welcoming attendees, Assistant Secretary-General of the United Nations and Deputy Executive Director of UN-Habitat, Victor Kisob, spoke on the important role played by the Global Urban Forum in promoting global cooperation and in sharing the wisdom of urban governance. He went into detail on the connotation of urban governance innovation, emphasizing the importance of making cities more efficient, orderly, and inclusive. 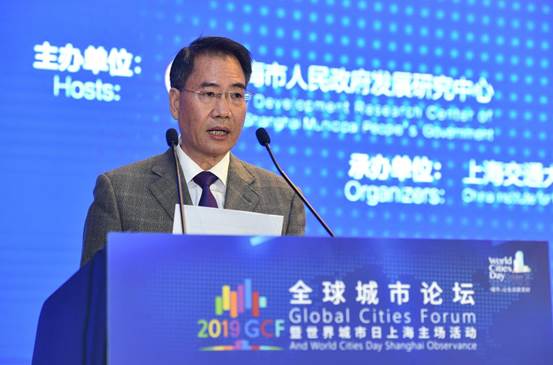 Li Liping, a first-class inspector at the Department of Planning, Finance and Foreign Affairs in the Ministry of Housing and Urban-Rural Development, speaks to attendees about the benefits of World City Day.

Li Liping, a first-class inspector at the Department of Planning, Finance and Foreign Affairs in the Ministry of Housing and Urban-Rural Development offered insight on World City Day as the special day relates to the ever-growing city of Shanghai. He also highlighted events—both home and abroad—that have taken place since the establishment of World City Day. Li addressed the challenges brought on by urbanization and noted that the forum provides a solid platform in which people can share experiences while participating in international exchange and cooperation. 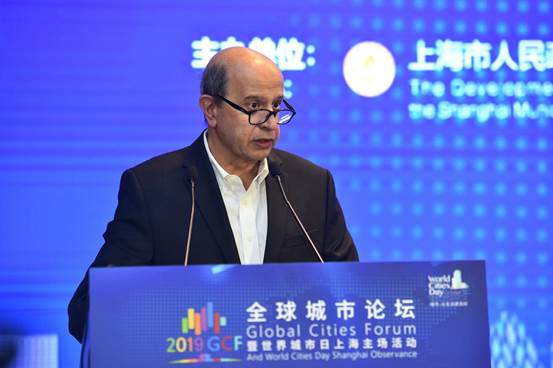 Barjor Mehta, the lead urban specialist on the World Bank’s East Asia Urban and Disaster Risk Management team, spoke highly in regards to China and its 40 years of “reform and opening up.” Mehta said that the World Bank considers it an honor to work closely with China as they continue to grow. In the future, the World Bank plans on strengthening ties with China, most notably in helping the country’s outstanding global cities as they progress. He also noted that, at present, there are still many challenges in relation to urbanization, which require the joint-efforts of all mankind. 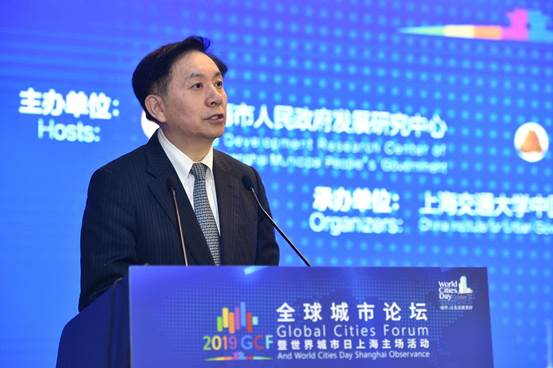 Jiang Sixian, CPC committee secretary of Shanghai Jiao Tong University, and dean of China Institute for Urban Governance, expressed gratitude to the leaders and guests in attendance. Jiang suggested that urban transformation can be defined as the modernization of urban governance, adding that innovation and development are the only pathways to urban transformation. To effectively innovate and develop, he argued that we must deeply understand "four innovations,” with one being to continuously practice new development concepts such as coordinating and sharing; two is to actively open up to the outside world in a collaborative sense; three is to continuously promote two-way integration with science and technology at the forefront of that transformation; and four is to continuously promote the application of new technology, which will—in turn—make cities more accessible, residents more sensational. 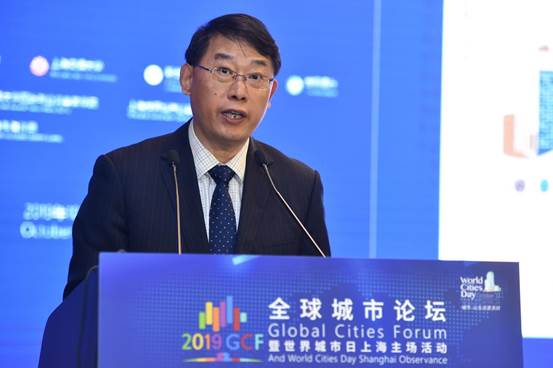 At this year’s forum, Zhang Zheng, vice director of the Shanghai Municipal Commission of Housing and Urban-Rural Development, unveiled the 2019 version of the Shanghai Manual, a resource on sustainable urban development in the city. Supported by the United Nations, the International Exhibition Bureau, the Ministry of Housing and Urban-Rural Development of the People's Republic of China, and the Shanghai Municipal People's Government, the guide promotes global urbanization and sustainable development, while also serving as a “living document.” The Shanghai Manual is constantly being updated over time in order to remain relevant, the UN notes on its sustainability website.

The 2019 edition of the Shanghai Manual is based on the theme of "City Innovation, Beautiful Homeland.” The cases within the manual are specific and representative, covering countries and cities in Europe, South America, Asia, and Africa. The guide takes location into account and has practical significance for cities at different stages of development. 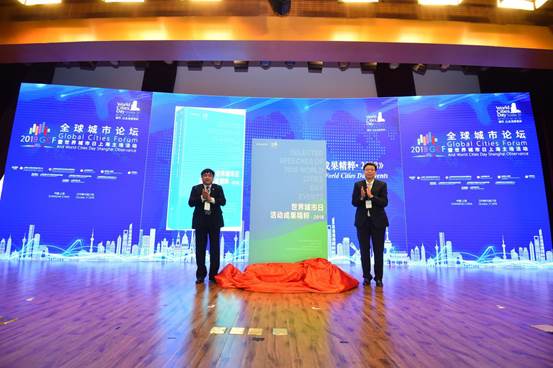 The 2019 forum also highlighted the release of “Selected Speeches of 2018 World Cities Day Events” (Chinese and English versions). According to the Shanghai Municipal Party Committee Secretary Li Qiang, the branding process of the book didn’t come without its challenges. “It should be carefully planned, have long-term merit, and make a greater influence,” Li said. Under the guidance of UN-Habitat and the Ministry of Housing and Urban-Rural Development, "Selected Speeches”—edited and published by the Shanghai Science and Technology Press—aims to offer insight, to tell the story of China, and to further develop the brand effect of World City Day.

“Selected Speeches” is composed of two major parts: the leader address and the expert speech. It includes 40 manuscripts, which are divided into six chapters and 200,000 characters. The book covers topics such as urban agglomeration, smart city, urban space, waterfront city, eco-city and humanistic city. 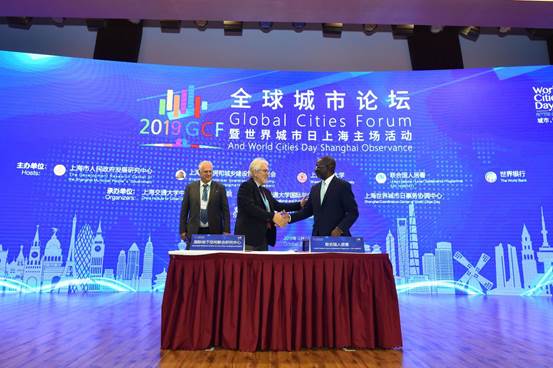 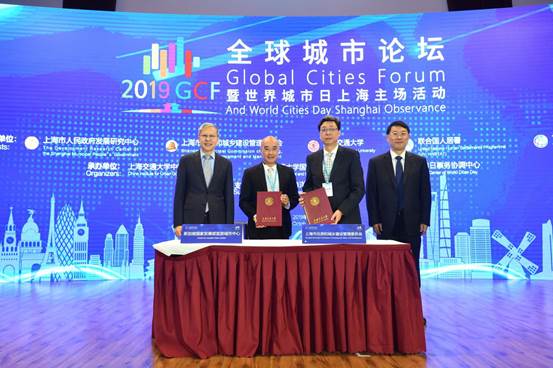 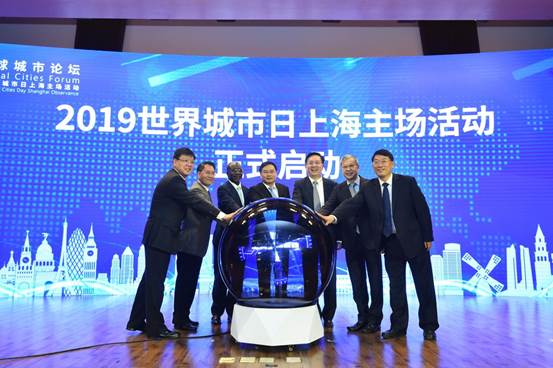 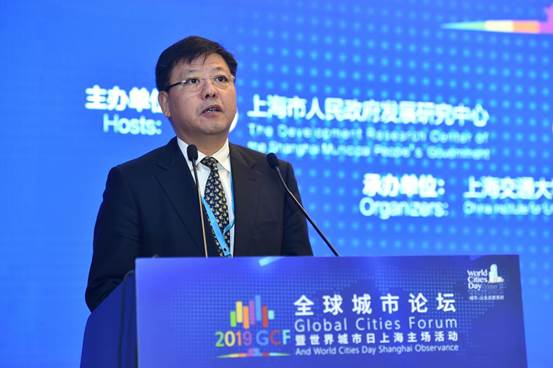 The keynote speech session was divided into two phases. The first phase was led by Zhou Cheng, vice secretary of the CPC Committee of Shanghai Jiao Tong University. Michael Koh, executive fellow of Center for Livable Cities in Singapore, Janet Benini, former director for Response and Planning in the White House, and Youngsam Choi, Consul General of the Republic of Korea in Shanghai, gave speeches on topics such as sustainability, crises and disaster management, Korean city trends, and co-op programs in China. 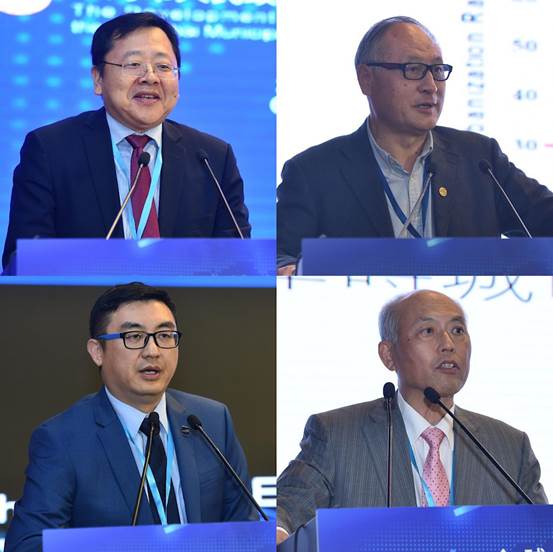 The second phase was led by Wu Jiannan, executive vice director of China Institute for Urban Governance and the head of the Division of Liberal Arts and Social Science at Shanghai Jiao Tong University. Zhu Dajian, the lead scientist at Shanghai Jiao Tong University’s China Institute for Urban Governance and the director of Tongji University’s Research Center of Sustainable Development and Governance, Chen Haibo, Chairman of DeepBlue Technology (Shanghai) Co. Ltd, and Yōichi Masuzoe, former Japanese Minister of Health, Labor, and Welfare, gave speeches on topics such as urban green development in China, the “Industry 4.0,” urban development, and technology as it “makes city life easier.”

In the afternoon, the sub-forum focused on the theme of "Changing the World: Innovations and Better Life for Future Generations" and was divided into the following four sessions: 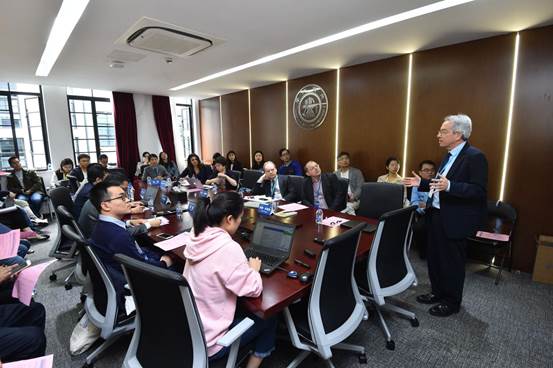 The forum continued with in-depth discussions on the theoretical and international practice levels. 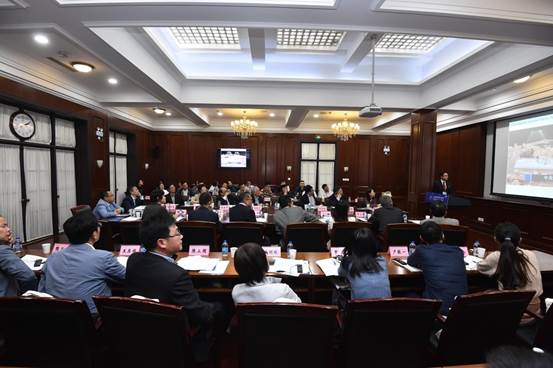 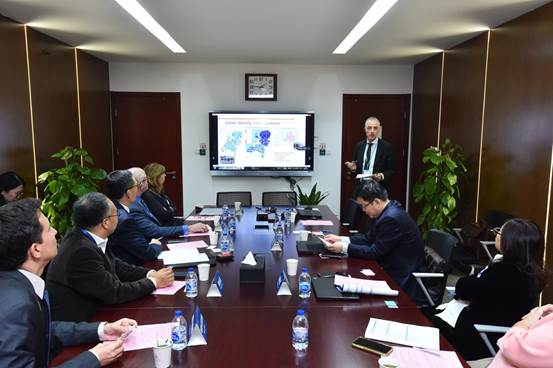 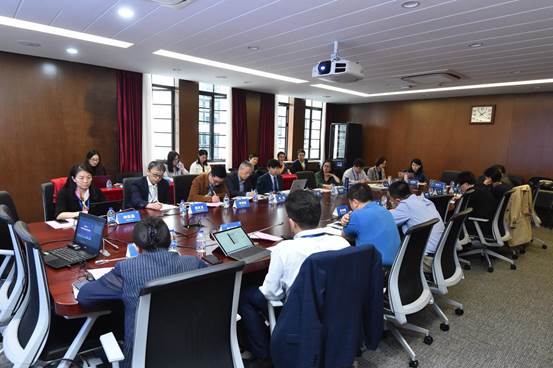 In the "City Innovation · Practice of Think Tank" sub-forum, leaders focused on the management and construction of think tanks, as well as practices in relation to university think tanks and urban governance. They also discussed the starting of new think tanks that contain Chinese characteristics.

The Global Cities Forum also held a themed forum with relatively independent issues and flexible meeting dates to provide attendees with a more enriched experience and to allow for more in-depth discussions.

The themed forum, "Changing the World: Innovations and Better Life for Future Generations,” was divided into the following four sessions: 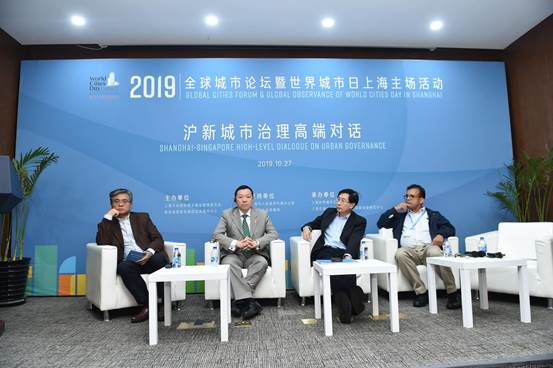 The "Global Cities · Shanghai-Singapore Dialogue" forum was moderated by key officials from the urban construction and management departments of Shanghai and Singapore. The forum focused on various aspects of housing security and urban management, including refined and intelligent urban management, urban housing security systems and practices, community renewal, and housing quality. The dialogue centered on the differences and commonalities between Shanghai and Singapore in urban governance.

With the theme of "Bringing Nature into the City,” the "Global Cities · Green Ecology" forum, allowed experts and scholars from China, France, Britain, London, Singapore, and Finland to exchange “the green vision,” while discussing strategic planning and ecological construction in each of their major cities.Participants were granted the opportunity to visit the site of the green eco-city model in Shanghai.

The “Highway-Bridge-Tunnel · Innovation and Development" forum invited well-known experts and scholars to highlight the achievements and discuss future strategies and developmental plans for the Shanghai Post Tunnel of the “Post Expo.” The forum centered on typical cases of innovation and development of Shanghai highway tunnels, and it offered attendees historical and futuristic perspectives.

The award ceremony for the 5th College Student Case Study Competition of Urban Governance was held during the closing ceremony on the afternoon of Oct. 27. 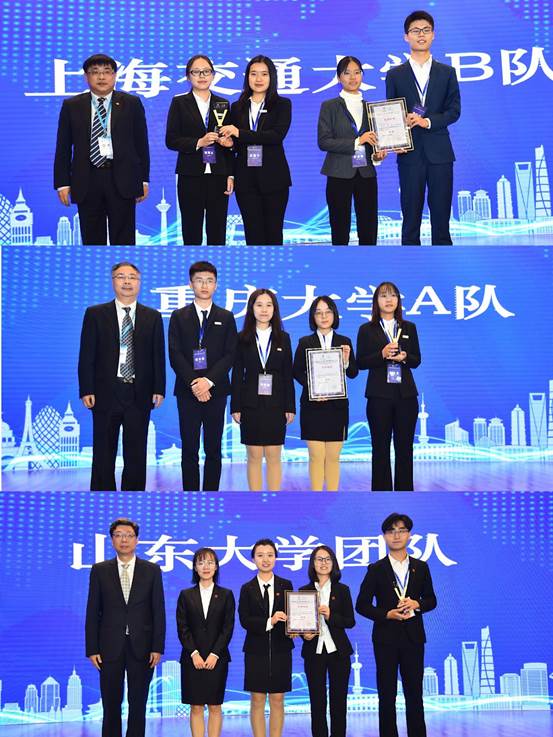 After intense preliminary competitions and rematches, 6 of the 104 teams from 60 universities across the country entered the finals. In the final, the six teams underwent case analysis, judges' defense, and audience inquiry. In the end, after the jury discussion and public vote, Shanghai Jiao Tong University team B, Chongqing University team A, and Shandong University won the team champion, runner-up and third runner-up respectively. Zhou Cheng, vice secretary of the CPC Committee of Shanghai Jiao Tong University, presented the award to the winning team. 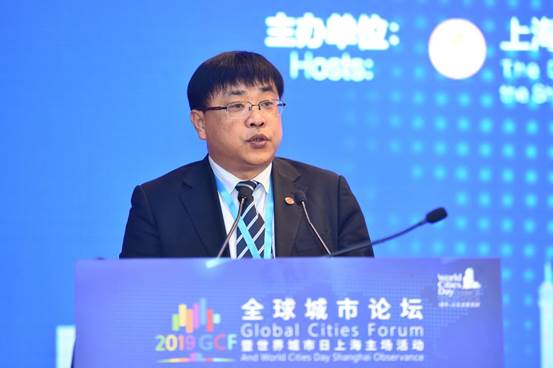 Cheng gave closing remarks and congratulated leaders on the success of the forum. He expressed gratitude toward the guests who brought much insight to the 2019 GCF. Cheng hopes that, in the future, everyone continues to use this platform in the future to spread knowledge and wisdom on urban governance on a global scale.