On October 27th, the 2018 Global City Forum hosted by the China Institute for Urban Governance of Shanghai Jiaotong University was held at the China Financial Information Center. This event is one of the theme activities of "World City Day". The theme of the forum is "Global City· ECO development". 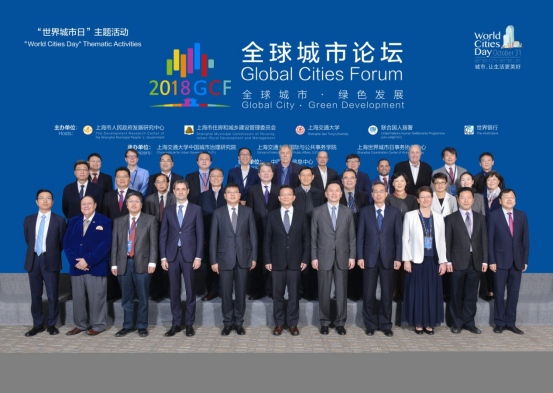 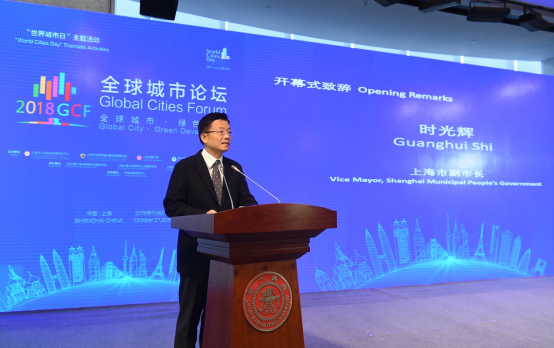 Shi Guanghui, deputy mayor of Shanghai, attended the opening ceremony and delivered a speech. He congratulated the convening of the conference and explained the significance of the global green of the new era. He introduced Shanghai's overall thinking and action plan for urban refined management, as well as the goals and vision of Shanghai's urban development, and called for extensive and in-depth exchanges to provide advice and suggestions for Shanghai's construction of a remarkable global city. 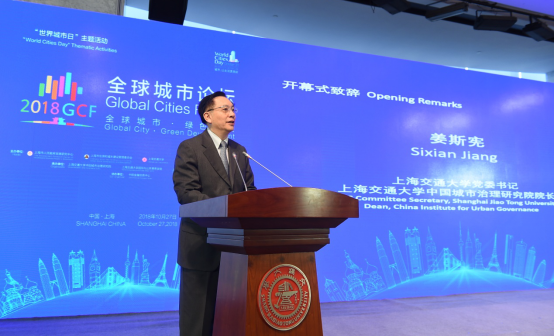 Jiang Sixian, Party Secretary of Shanghai Jiaotong University and President of the China Institute for Urban Governance, expressed his gratitude to the leaders and guests for their arrival, and briefly introduced the preparations for the forum and the profound connotation of the theme of the forum. He further introduced the efforts of Shanghai Jiaotong University and China Institute for Urban Governance in recent years to promote the modernization of urban governance systems and governance capabilities. 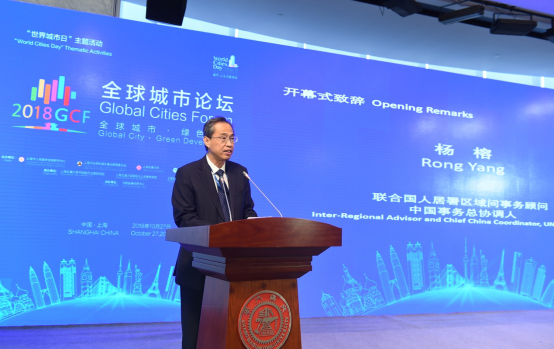 In the speech, Yang Rong, the UN-HABITAT Interregional Affairs Consultant and General Coordinator of China Affairs, expressed his belief that this forum will not only further implement the spirit of the 2030 Agenda for Sustainable Development and the New Urban Agenda, but wil also play an active role in promoting the sharing of the concept and experience of green development in Shanghai and other cities. 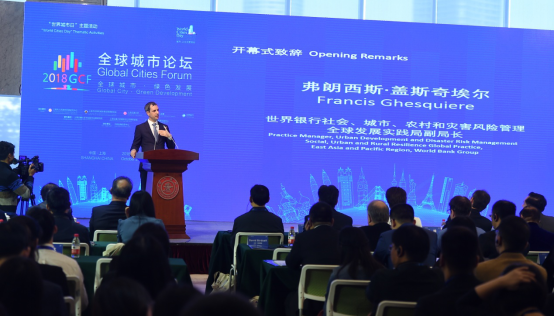 Francis Gaschiel, deputy director of the World Bank's Social, Urban, Rural and Disaster Risk Management Global Development Practices Bureau, made a speech. In his speech, he introduced the latest developments in the World Bank's support for flexible urban construction in recent years. 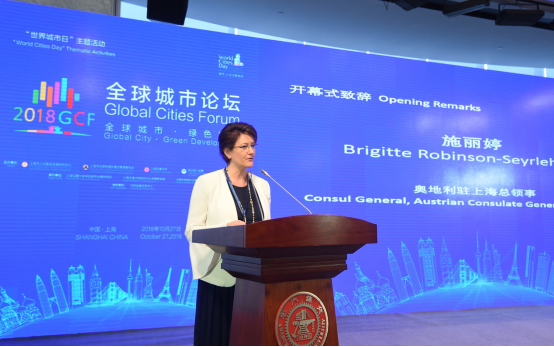 Shi Liting, Consul General of Austria in Shanghai, expressed his gratitude to the sponsors and organizers of the forum and introduced some of Austria's practices in the green development of the city. She firmly believes that the Global Urban Forum will play a vital role in the topic of urban development. The opening ceremony of the meeting was hosted by Huang Rong, deputy secretary general of Shanghai Municipal Government. 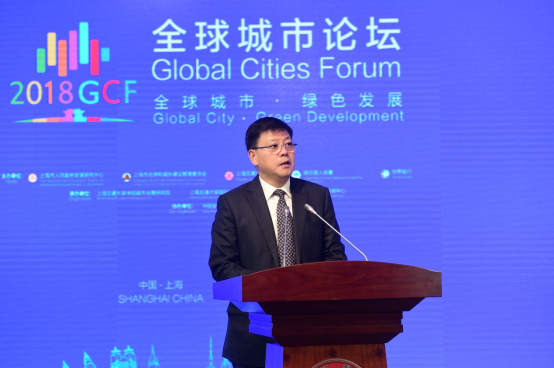 Also present at the forum were nearly 100 well-known scholars from more than ten countries and regions including the United States, Britain, France, Canada, Singapore, Japan, Austria, South Korea and Australia, and about 300 guests from major universities in China, government departments in the Yangtze River Delta, major media at home and abroad, related companies and social organizations. 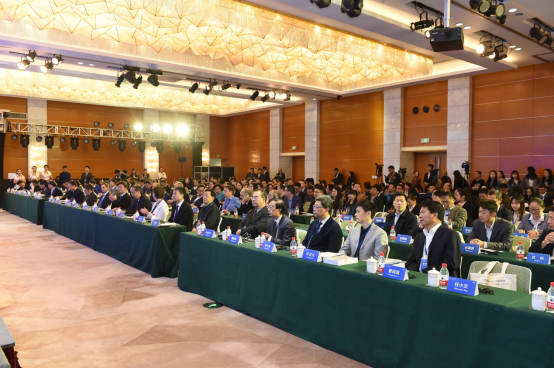 At the opening ceremony of the forum, the introduction of the Chinese version of the 2018 Shanghai Handbook and the interpretation of its features and highlights were also held. The award ceremony of the first “Climate Practice Cases for Yangtze River Delta Urban Management” was held by the China Institute for Urban Governance of Shanghai Jiaotong University as well. 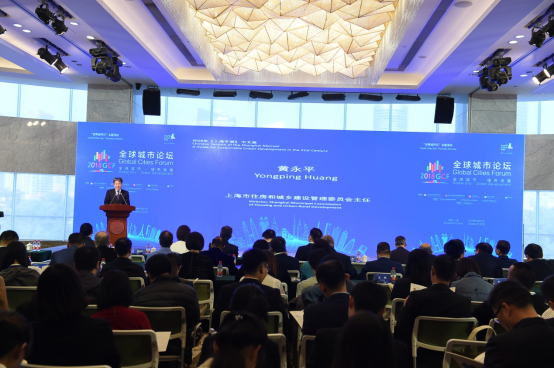 The 2018 Annual Report of the Shanghai Handbook was jointly edited by the United Nations, the Bureau of National Exhibitions and the Shanghai Municipal Government. With the theme of “Eco-city, Green Development”, the annual report carefully selected 18 cases from the six dimensions of economy, society, ecology, culture, governance and international cooperation. In the final chapter, the annual report also elaborated on policy recommendations for refining and sorting out the sustainable development of different types of cities from typical cases, so that it could have a stronger guiding role. 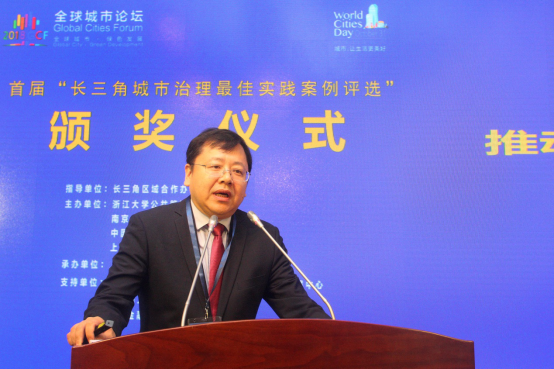 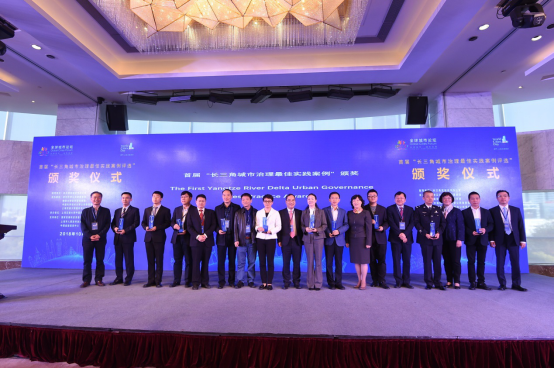 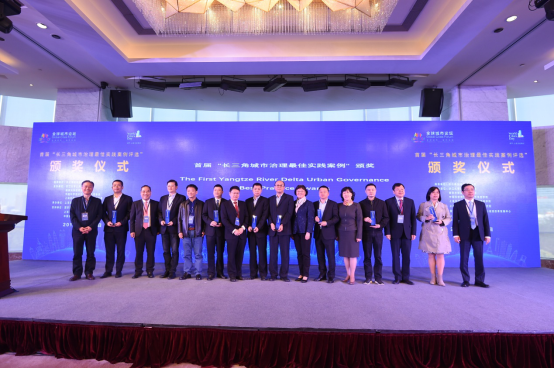 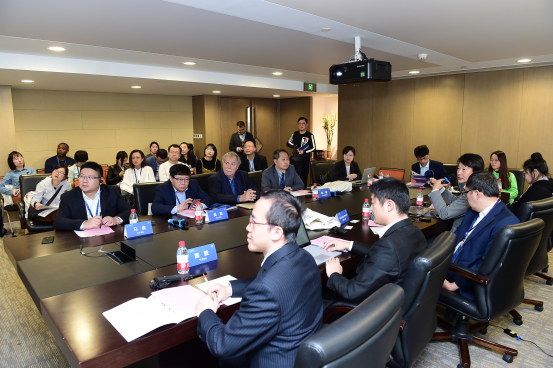 In the global city and ecological civilization special session,  the speeches of scholars from Japan, France and Singapore are mainly based on the reflection of the relationship between urbanization and ecological civilization. They explored the various urban diseases brought about by the industrialization process of urbanization and the high concentration of population. For the serious challenges of the current city in terms of population, resources, environment and ecology, experts and scholars believe that it is necessary to create a new civilization to continue the sustainable development of the city. 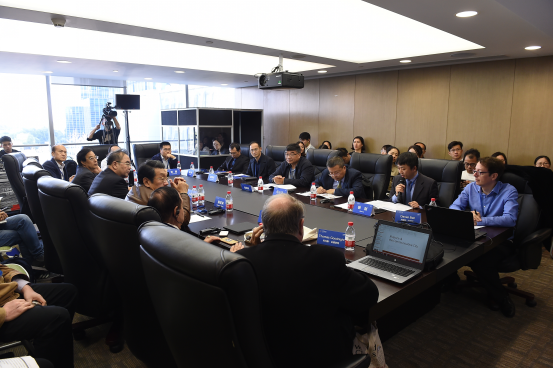 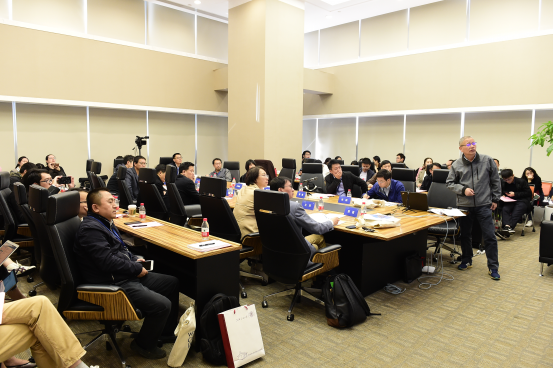 The Global City and Digital Governance special session attracted experts and scholars from more than ten universities in China. The participating scholars summarized the achievements of smart city construction in recent years at home and abroad, focusing on the strategy, direction and policy of smart city development, smart city top-level design, urban refined management and public information services, urban information infrastructure construction, urban information resources sharing, development and utilization, as well as the application and development of technology such as Internet of Things, cloud computing, and big data. They look forward to the future development trend of smart cities and put forward the idea of promoting the transformation of academic research results in the field of smart cities. 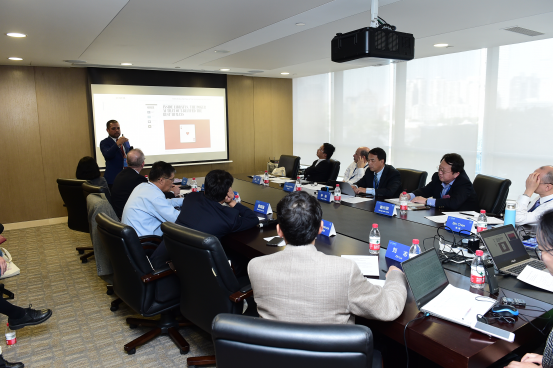 In the Global City and Cooperative Governance special session, experts and scholars at home and abroad mainly focus on issues such as public participation, public services, metropolitan governance, and development of the Greater Bay District. The participating experts summarized the institutional procedures and practical experience of public participation in urban governance in Shanghai, and explored the design of a public participation procedure system that can be specifically operated and effectively implemented. They also analyzed the multi-participation in the supply of basic public services, allowing residents to participate in the policy design of public service provision, proposing service demand, and improving the accuracy of public services; they further explored the horizontal and vertical synergy between urban governments to adapt the needs of the development of metropolitan areas, urban agglomerations and the Greater Bay District. 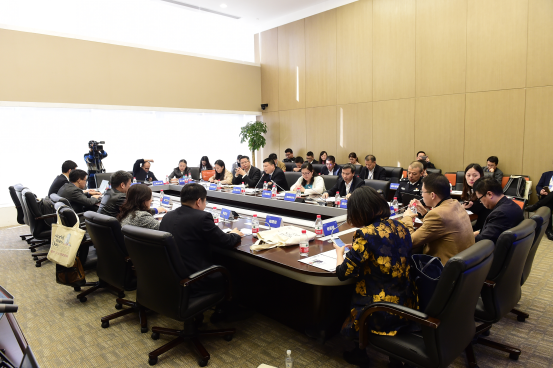 In the Global City and Best Practice special session, relying on the “Cultural Selection of Best Practice Cases in the Yangtze River Delta”, the experts and scholars of the selection activities, the reporting units of the award-winning cases opened up dialogues and exchanges centered around issues such as community governance, governance system reform, and social organization participation in urban governance. Participants agreed that the award-winning case represents the current trend and direction of urban governance, forming a city governance experience with the characteristics of the Yangtze River Delta, with value that can be replicated and promoted.

At the closing ceremony of the forum, the sub-forum hosts summarized the discussion content of the sub-forum; the awards for the Urban Student Management Case Challenge was also held. The “Global Network of Central Cities” evaluation index and the latest research results of the “Shanghai Urban Regional Entrepreneurship Ecology Index” was released as well. 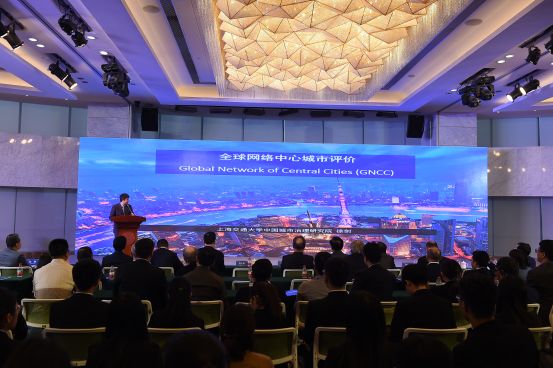 Xu Jian, K. Wah professor of the China Institute for Urban Governance of Shanghai Jiaotong University, released the “Global Network of Central Cities (GNCC)” evaluation index. The index was mainly based on the preliminary survey of 1568 cities that have been publicly released in the evaluation and ranking of major cities at home and abroad, retaining 483 cities to enter the second step of the global city selection process. It evaluated 152 cities based on the three major functions of the global city and the “five-flow” evaluation system, and finally selected 70 cities to be included in the global cities. 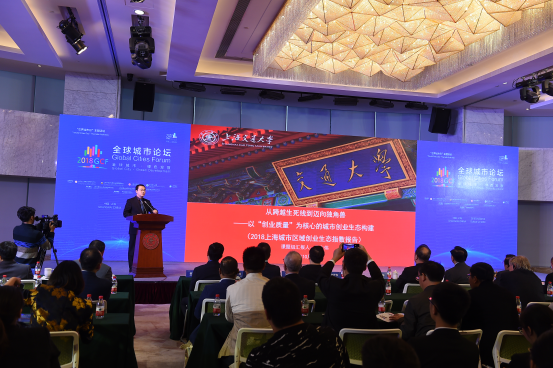 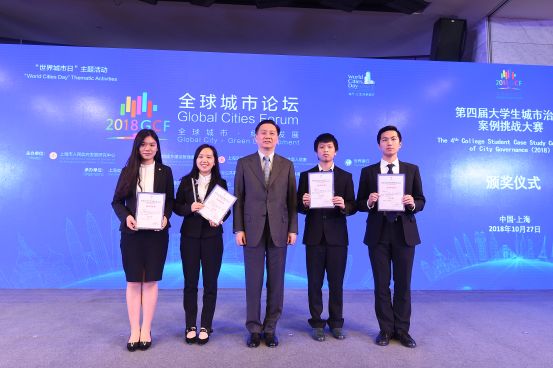 In the final of the 4th College Student Urban Governance Case Challenge, 6 teams conducted case analysis, judges' defense and audience inquiry. In the end, after the jury discussion and the public vote, Shanghai Jiaotong University, Renmin University of China, and the joint team (Shandong University, Wuhan University and the Chinese University of Hong Kong jointly won the team championship, runner-up and third place respectively. Song Ziyuan from Renmin University of China, Tang Xiaoyun from Shanghai University of Finance and Economics, Ren Xinmiao from China University of Mining and Technology won an outstanding individual. The award ceremony was held at the closing ceremony of the Global Urban Forum. Jiang Sixian, secretary of the Party Committee of Shanghai Jiaotong University and dean of the China Institute for Urban Governance, presented the award to the winners of the 4th College Urban Management Case Challenge Contest and offered his congratulations. Lu Yonghua, Zhang Mengjun, Cheng Jian, Zhang Yongjin, and Qiu Wei respectively presented awards to the third runner-up teams of the competition. Jiang Wenning, Wu Jiannan, and Shi Xiaochen presented awards to outstanding students.

Jiang Sixian, secretary of the Party Committee of Shanghai Jiaotong University and dean of the China Institute for Urban Governance, gave a closing speech for the forum. He mainly summarized the characteristics of the forum and explained and interpreted the significance and value of global green development. Liu Qianwei, chief engineer of the Shanghai Housing and Urban-Rural Construction Management Committee, presided over the closing ceremony of the forum.

The Global City Forum is dedicated to providing a global and exciting stage for political, academic and industry discussions on urban development, innovative urban theories, contending academic views, and sharing management experience. It is committed to providing a high-end platform for the refinement, dissemination and promotion of urban governance models in the world. The Forum is increasingly becoming a brand example in the theme series of the World Cities Day.